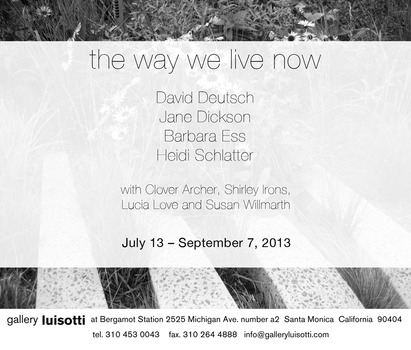 Gallery Luisotti is pleased to announce its upcoming exhibition, The Way We Live Now, curated by Shirley Irons. Taking the title from Anthony Trollope’s 1875 satiric novel about the all-too-familiar excesses of human
behavior that arises during peaks of economic prosperity, the works in The Way We Live Now, in their distinctly bleaker visions, suggest the impending dusk awaiting the end of every golden age. Artists in the exhibition include Jane Dickson, David Deutsch, Heidi Schlatter, Lucia Love, Barbara Ess, Clover Archer, Susan Willmarth, and Irons. Living through the malaise of the financial crisis of 2008 has undoubtedly shaken what confidence we had in the concept of a free economy that, in hindsight, we passively hoped would have the moderation to not cannibalize itself. The well-wishing proved to be an enormous miscalculation. What we can take from a Bernie Madoff or Wall Street investment houses, or Melmotte, the intractable character of runaway greed in Trollope’s novel, is how a single bad idea can systemically ruin the lives of many others. This exhibition offers the post 2008 world through visions of learned melancholia: empty streets, emptier houses, signages that once acted as symbols of relief but no more (Heidi Schlatter, Crowd Control; Jane Dickson, LV 10 (Auto Loans), 2008). When the money is gone, the people disappear as well. Melotte’s dream of attaining his fortune was veiled under the haphazard guise of creating a new railway connecting Salt Lake City to the Mexican coastline port of Veracruz. Over a 135 years later, the psychological itch to build empires through pointless activities of construction –necessitating the willing marks to fund such ventures- is all too alive and well. The disaster of the sub-prime mortgage initiative that triggered a housing boom built on money that never quite existed is exemplified in the strange qualities of the houses in the show. Schlatter and Dickson’s houses are classically well-proportioned but eerily removed of any signs of life; Susan Willmarth’s small, tombstone-like Heart Hut, 2000 is less a figure of a home than it is an object marking the time of an exceptionally reckless era. The easy gains of a brief moment is soon lost. Like Barbara Ess’ photographs of an unused bridge and a darkened hillside, taken in the appearance of a surveillance still-shot, no one should expect a return to contentment soon. As some cultural thinkers have attested, the financial crash had the effect of putting an end to the cycle of a certain American lifestyle, the lid put on by the invisible hand of a culture raised on the expectations of having more, and wanting it for no apparent reason than simply expecting so. History doesn’t necessarily repeat itself as it serves to remind those things that anchor our past. Ess’ blurry photograph of the Kennedy shooting in 1963 also attests to a collective loss of innocence to a generation, granting a purview of how this era of unrest will soon remember itself. Clover Archer’s drawing of New York Times broadsheets printed on a particularly bad day, December 21, 2008 (Periphery: For Every Given Focus), is a reminder as much as a discomforting repetition of the stories of economic woes and an endless war that is very much with us today. In the midst of such endless bad news, David Deutsch’s installation of suburban houses’ roofs taken at night with a searchlight from above is about finding something that may have been already lost, save for the beautiful shadow of ugly things. Trollope found a well-source of humanism in the industry of men. Commodified and bankrolled, this sentiment seems far from the past. Irons’ somber light bulb (Bulb, 2013), wan and unlit, attests that Trollope’s hope too, when folly wed financial ambition, may have reached its point of twilight. 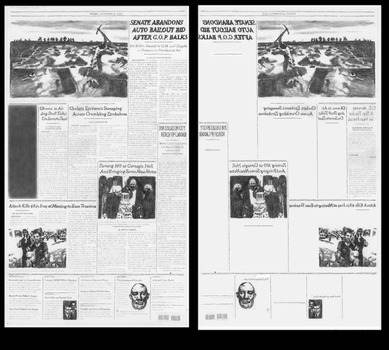 This drawing of the front page of the NYT on the day that Bernie Madoff was first arrested but redacts the Madoff article. Considering everything that was going on around the Madoff arrest is a way of acknowledging the complexity of the periphery of any given focus and randomness of parallel events (in keeping with my work). But also it could be read as a willful disregard of a blatant fact (as practiced by many of the characters around Melmotte and Madoff). Either way, stuff happens and then gets folded into the vastness that is the past. 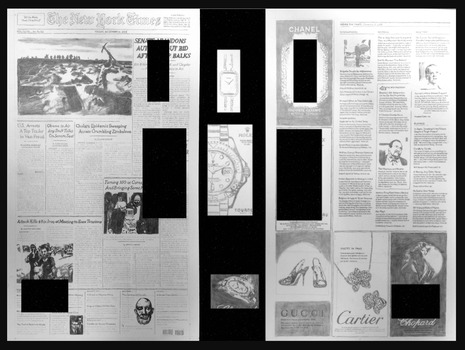 Strange gaps, missing information, fragments--all accidental result of highlighting the luxury items that seem absurd in the face of what is going on in the world (on page 1). We can't read the more immediate information because clipping the Tiffany ad redacts part of the article.
1 / 3
Loading...